Veteran game designer, writer, and editor Peter Schweighofer founded Griffon Publishing Studio as a platform to publish his own sourcebooks and games for adventure gaming enthusiasts, including roleplaying sourcebooks like Pulp Egypt and Heroes of Rura-Tonga as well as other projects like the solo wargame Operation Drumbeat and the children’s tabletop adventure game rules Valley of the Ape.

Known for writing and editing numerous Star Wars roleplaying game products for West End Games, he has spent more than 20 years designing, writing, editing, and publishing rolelplaying game materials. He writes weekly about issues in adventure gaming at Hobby Games Recce. Explore this site and check out About Schweig for more information about his professional writing and game design endeavors. 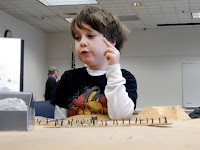 Are you running a Panzer Kids event at a convention or game day? Let us know by sending an e-mail with “Panzer Kids Event Support” in the subject line. Provide details of the event – date, time, place, etc. – and we’ll do our best to cross-promote it. We can also try sending along some giveaways to help encourage newcomers and children to explore the adventure gaming hobby through Panzer Kids. 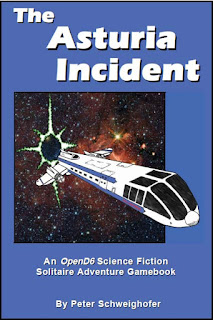 Nov. 7, 2019 – Veteran game designer Peter Schweighofer released a solitaire adventure gamebook, The Asturia Incident, using the OpenD6 system familiar to fans of West End Games’ classic Star Wars: The Roleplaying Game. The scenario involves an elite herald – part intelligence agent, part diplomat, part courier – who flees agents of a crime syndicate aboard a luxury cruiser, where things don’t quite go according to plan. The programmed adventure includes an overview of the OpenD6 rules, a character sheet, the story introduction, and 191 numbered entries detailing situations and choices aboard the luxury liner Asturia. You’ll need a handful of six-sided dice; a pencil and some note paper can help you keep track of your character’s status, clues he discovers, or other information worth remembering.

“I wrote The Asturia Incident to provide a solitaire tutorial adventure for those exploring the OpenD6 game system mechanics (or brushing up on them after a brief absence) and to offer an engaging science fiction adventure for novice and seasoned gamers,” Schweighofer said. “It indulges science fiction influences that inspired me in the past, from my enjoyment of the classic Traveller roleplaying game in the days of my misspent youth and my love for West End Games’ D6 System to my admiration for science fiction writer Larry Niven, in whose short story “Grendel” (from the Neutron Star anthology) I found inspiration for this solo adventure’s premise.” 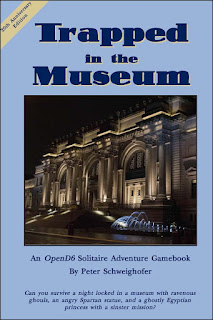 June 17, 2019 – Griffon Publishing Studios officially released Peter Schweighofer’s OpenD6 solitaire adventure gamebook, Trapped in the Museum, in a 20th anniversary edition. “I first developed and released this solo adventure in the year after West End Games declared bankruptcy and laid off its staff,” Schweighofer said. “Trapped in the Museum was part of an effort to keep my name and game design reputation in the public eye in the hopes it might attract some freelance writing work. It was the unintentional launch of a 20-year independent publishing career.” Schweighofer talks more about his experiences with and inspirations for Trapped in the Museum in a Hobby Games Recce blog post.

The 44-page gamebook contains an introduction with character stats and basic rules revised for the OpenD6 system, 57 entries, full-color artwork, and D6 game stats so you can use the adversaries in your own pulp roleplaying game adventures. Readers make story choices and die rolls, following numbered entries incorporating rules for overcoming obstacles based on the classic D6 System developed by West End Games. Just add a few six-sided dice and you’re ready to play!

Trapped in the Museum is available as a pay-what-you-want PDF download from DriveThruRPG. Those seeking something to read and keep on the bookshelf can order a full-color print-on-demand version from Lulu. Of course readers can still download the original, free version of Trapped in the Museum from 20 years ago using S. John Ross’ Risus game mechanics. Check out the Griffon Publishing Studio “Free Downloads” page.

Schweig writes regularly about games over at the Hobby Games Recce blog.